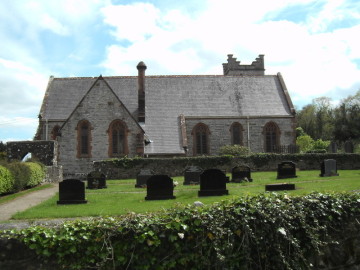 In 1630, an inquisition found that the chapelry of ‘Monneagh’ was in the middle of the parish of Devenish and it was more suitable for a parish church than the church on the island of Devenish.

The restored old church of Monea only survived to 1641, when it was burnt down during the rebellion.  Its thatched roof of heather caught fire easily.  The castle sentry shot the man who put the torch to the roof and this is still known as the ‘Long Shot’.

The church that replaced the burnt one was a plain oblong ugly building, 15 metres long by 5 metres wide, with a door at the west end.  There was no tower and probably only four windows, three on the south side and one on the east gable.  A bell hung on the Yew tree outside the church.  The church was probably thatched, but may have been covered in oak shingles.  It was slated in 1740.  The floor was flagged with local stone from the quarries of Leighan and Carrickreagh.

A large transept called the ‘Isle’ had been added to the north side, almost midway between the east and west ends of the church-10 metres in length by 6.1 metres wide.  In 1787, a gallery was erected across the north end of the transept.  The tower was built in 1787 and was incorporated into the modern building in 1890.  It is 13.7 metres high, pierced on two sides with quartrefoil windows, four lancets in the Belfry with Irish battlements.  The two entrance archways and the graveyard wall were built in 1761, when the Rev Philip Skelton was rector of the Parish from 1759 to 1766.

The Devenish window dating from 1449 was taken from St. Mary’s Abbey Church and inserted in the east wall about 1804.  The font was also transferred at this time.  It was made of dark grey igneous rock.

The last service was held in this church on Whit Sunday 1889.  The present building cost £3000 and was paid for by the widow and sisters of John Dawson Brien, Castletown.  It was opened on 2nd October 1890.

The architect was Thomas Drew who also designed the Belfast City Hall.  The architecture is Gothic.  The nave and chancel is 24.4 metres long.  The south transept is longer than the north.  The stone used was freestone from Leighan quarries.  The building was dressed in Dumfries red sandstone.  The arches and pillars were moulded in bathstone and the pulpit was set in bathstone.  The pillars are adorned with grapes on the south and brambles in the north. The communion rails consist of a bar of oak with brass supports.  There is oak panelling on the east wall and the reading desk, lectern and pulpit are also made from oak.  Four oak Glastonbury chairs were presented when the building was opened.  It seats 220 people.  The pews and roof are made from pitch pine.

Devenish and Boho Parishes were amalgamated in 1945. The Rev Swanton was the first rector of the joint parishes.﻿